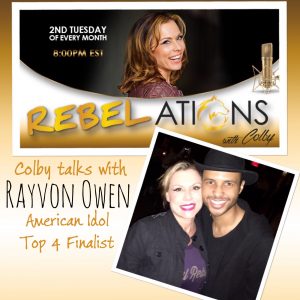 Rayvon Owen from American Idol fame is joining Colby on REBELations! Come and join Colby April 12th at 5pm pst for another episode of REBELations with Rayvon Owen.
This will be an episode not to be missed as Colby has the unbelievable opportunity to talk with Rayvon Owen of American Idol fame. Rayvon was one of the top 4 finalists on last years’ season of American Idol. Having just wrapped up his American Idols tour this past summer, Rayvon is excited about his new album due out later this year. In this rare interview, Rayvon decided to sit down and talk intimately with Colby about his fame, his art and stepping into his true self to find love.

Rayvon Owen is a musician and a finalist in season 14 of American Idol finishing 4th overall. He released his EP Cycles August 26, 2014 prior to the contest, and his official single “Can't Fight It” in February 2016.

You can catch colby on her show Psychic REBEL Live aired on ubnradio.com or subscribe to her itunes podcast Psychic Rebel. She also hosts a monthly show REBELations  on OMRadio. Additionally, she also appears as a guest on Calling Out with Susan Pinsky.

Colby is also a published author in the esteemed publications OM Times Magazine and Finer Minds.